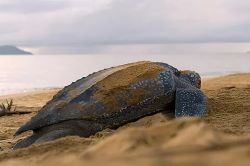 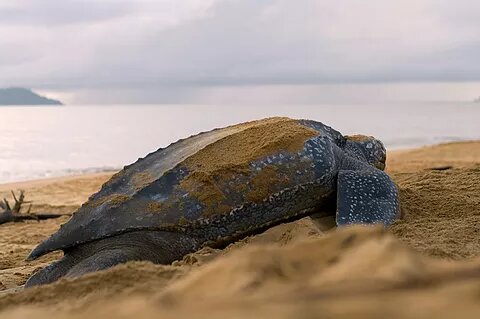 At the heart of the Caribbean arc, the islands of Guadeloupe and Martinique are an essential link in the protection of nature in the Caribbean. On land, they are home to some of the world’s largest colonies of the Lesser Antillean Iguana (Iguana delicatissima), a species endemic to this region and critically endangered locally and globally. At sea, their waters are frequented by 5 of the 7 species of marine turtles known worldwide, including 3 species found on nesting beaches: the green turtle (Chelonia mydas), the hawksbill turtle (Eretmochelys imbricata) and the leatherback turtle (Dermochelys coriacea).

The National Action Plans led by the ONFI-ONF teams.

The Lesser Antillean Iguana and these 3 species of marine turtles are threatened with extinction. In view of France’s responsibility for the conservation of these species, National Action Plans aimed at halting their decline and preventing their extinction have been established.

The implementation of these plans are carried out by :

The NPA management team, made up of 3 ONFI employees and 2 ONF project managers, is responsible for coordinating the implementation of the actions defined in each plan, in partnership with local structures that are members of the Marine Turtle Network (Guadeloupe and Martinique) and the Lesser Antillean Iguana Network. These are institutional partners, local authorities, NGOs, research laboratories, law enforcement agencies, etc. The actions carried out are divided into three main themes: (i) species conservation, (ii) improving knowledge of their biology and ecology, (iii) raising awareness among the public, decision-makers, and social-professional players such as fishermen involved in marine turtle conservation. The Marine Turtle Leaflet and the Lesser Antillean Iguana Leaflet show few examples of actions and the main results obtained for each of these aspects.

NAP actions in favour of the Lesser Antillean Iguana.

The Lesser Antillean Iguana is assessed as critically endangered – the final stage before the species disappears from the wild – on the IUCN Red Lists in Guadeloupe, Martinique and throughout its global range: the Lesser Antillean arc. Thanks to population monitoring using capture-mark-recapture methods implemented within the framework of the NAPs over the last ten years, the number of iguanas is estimated at around 10 000 individuals on the islets of Petite Terre and a few hundred individuals on the island of La Désirade; the species has virtually disappeared from mainland Guadeloupe. In Martinique, the population is estimated at a few hundred individuals on the islet Chancel and remains poorly known in the forests of the Mont Pelée, in the north of Martinique, where the environment makes it difficult to monitor the species’ population. The objective of the NAP is to reverse the decline in the populations of La Désirade and îlet Chancel, and to maintain the population on the natural reserve of Petite Terre. 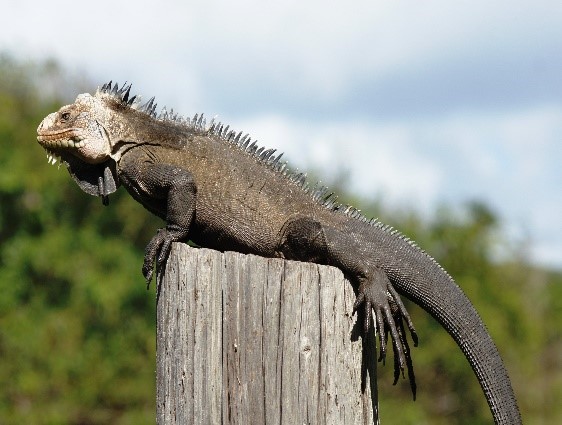 Among the necessary actions, the fight against the stripe-tailed Iguana Iguana is an absolute priority. This invasive alien species is the greatest threat to the Lesser Antillean Iguana. When the striped-tailed Iguana, introduced by humans into the West Indies, meets a population of Iguana delicatissima, the latter eventually disappears through competition and hybridization with the invader. The Lesser Antillean Iguana populations on the islands of Petite Terre and La Désirade in Guadeloupe, and Chancel in Martinique, are not currently in contact with the striped iguana. To prevent this risk, stripe-tailed iguana early warning networks have been created by training professionals and citizens to recognize, and even capture and kill, this exotic species. The objective is to create “buffer zones” free of stripe-tailed iguanas around the embarkation points of ships carrying passengers and/or goods to these “satellite” islands. These are the main vectors for the introduction of the striped iguana to these islands, which are still preserved to this day. In 2020, for example, 12 stripe-tailed iguanas, including 4 in sensitive areas, were captured after the Martinique monitoring network reported them to the ONFI team.

These networks show the importance of a population that is aware of the issues. An educational caravan was set up in 2018. Since then, it has been travelling around the territory to meet the public and schools. In 2020, nearly 5,000 citizens were made aware of the issues during 24 days of activities in Martinique, while the caravan will be deployed for the first year in 2021 in Guadeloupe.

Since 2017, the ONFI coordination team has been coordinating the monitoring of sea turtle egg-laying tracks on the beaches of Guadeloupe and Martinique. This monitoring, carried out for 20 years, provides a standardized indicator on a global scale of the evolution of breeding populations. In 2019, 3,084 egg-laying tracks were observed on 173 beaches in Guadeloupe, Saint-Martin, and Martinique. The analysis of these data via statistical modelling will allow in 2021 to define the demographic trend of each breeding population over the last 20 years. 2021 will also see the creation of a protocol for monitoring sea turtles at sea, whose feeding populations in the French West Indies are mainly young turtles that have not yet reached sexual maturity. Genetic and telemetric analyses have shown that the French West Indies constitute a real nursery on the scale of the wider Caribbean. For instance, 17% of the young green turtles that feed in Martinique before reaching adulthood were born in French Guiana; 23% were born in the Eastern Caribbean, 25% in the South-East Atlantic, 13% in the South-West Atlantic and 22% in the North-Western Caribbean (Chambault et al. 2018[i]). This cosmopolitan representation shows the importance of protecting the young green turtles of Martinique:  they will be the future adult turtles that will lay their eggs on the beaches of the entire Greater Caribbean!

To protect these young turtles, the NPA management team has developed an ambitious program to reduce accidental catches by the coastal artisanal fishery in Guadeloupe and Martinique. This “bycatch” project was launched at the end of 2020, supported by the CNRS, the Guadeloupe National Park and IFREMER. It aims to reduce this threat, which is the most important for marine turtles. Thanks to the close collaboration between fishermen and scientists, it will enable innovative fishing gear and practices to be tested over the next two years.

On land, projects to restore the egg-laying habitats of adult females have been launched. They make the most of the ONF’s know-how in ecological restoration of the coastline, through projects that integrate the re-vegetation of beaches, the protection of vehicle access and the reduction of light pollution.

Finally, following the example of the Lesser Antillean Iguana, an educational caravan was created in 2019. It raised awareness among more than 4,000 citizens in 2020 in Martinique and will be inaugurated in Guadeloupe for the first time in 2021. 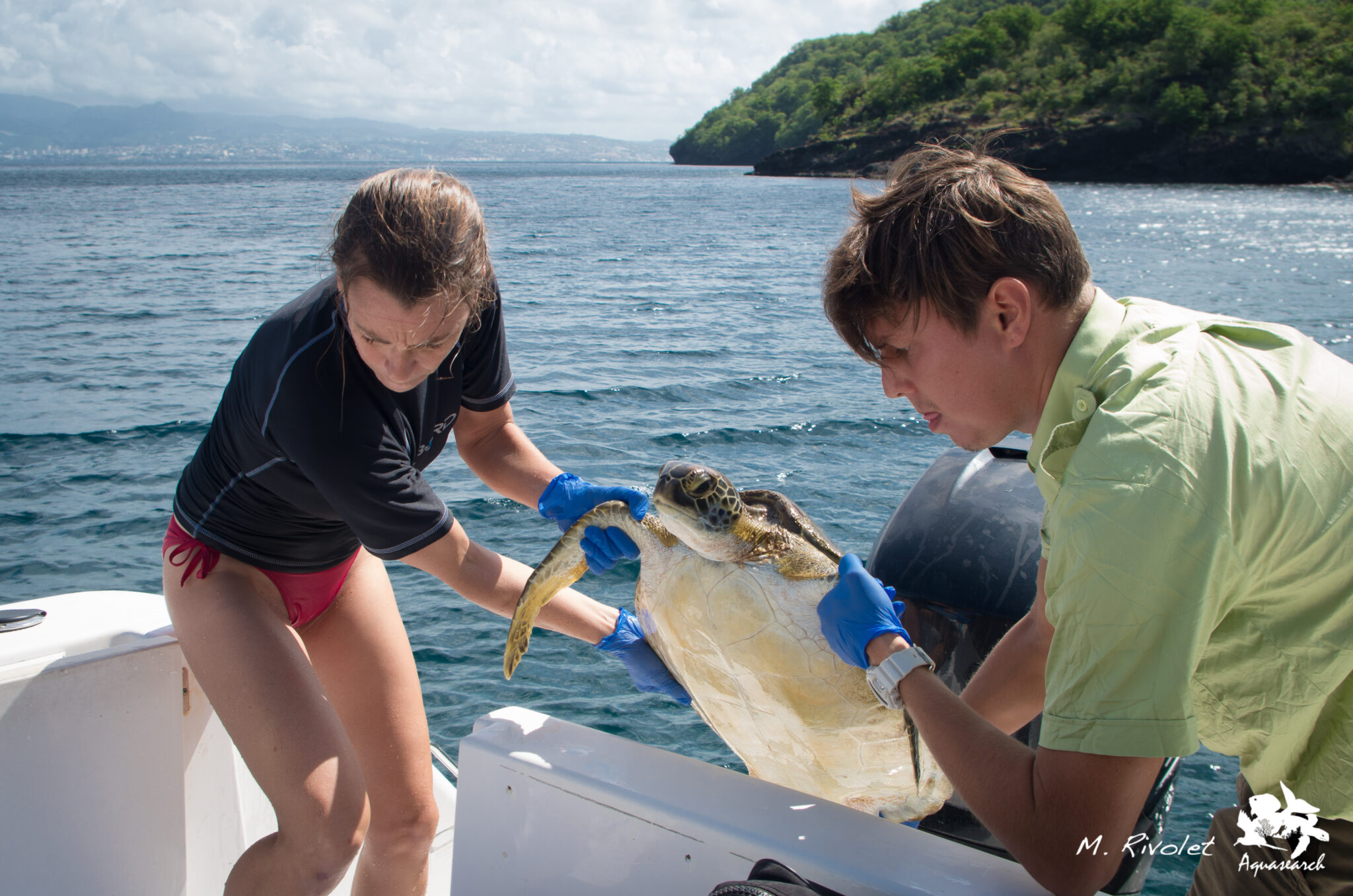